The group had existed for several years prior to 2000 as a breed and release scheme, however licences for this activity were no longer being issued and so we sought other ways to make an impact on the conservation of barn owls in the Mid Cheshire area. 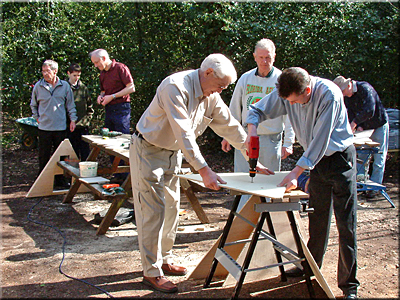 We are people from many walks of life with varying degrees of knowledge and experince of barn owls, including people who have never even seen a barn owl but non the less recognise their plight. We are all concerned about the decline of the barn owl and want to contribute to it’s survival. We meet regularly to discuss current issues, sightings and identify the action that we will take to assist in the conservation of this endangered species.
Why do we exist?

In 1932 there were 240 pairs of barn owls in Cheshire and by 1985 there was just 35 pairs. This represents a decline in Cheshire of 85% against an average decline rate of 69%, one of the highest decline rates in England & Wales. That was bad but worse was to come and in 1999 only 10 breeding pairs were recorded in Cheshire. We almost lost the the barn owl in Cheshire (click to see full size).

The number of breeding pairs in 2000 was recorded as 19 and appeared to have been an increase over previous years but the truth is that by then recording was more accurate due to the increasing network of recorders such as barn owl groups like ours and increased public awareness.  Therefore we tend to consider 2000 and 19 breeding pairs as the first date we can consider as being reasonably accurate.

Never the less the decline was dramatic and we aimed to reverse this decline and to do so we set out our aims and objectives.

Group meetings are held on the last Thursday of most months at 7.30pm at Lower Moss Wood, contact us to confirm the dates. Periodic meetings are also held during the summer months including visits to reserves, various forms of field work and social events.

Members are encouraged to assist with field survey work, the placing of barn owl boxes in suitable locations, attendance at agricultural shows etc. with general advice and instruction being available for these activities. Members pay an annual membership fee as described in the membership application form.

It should be noted that a Confidentiality Protocol will be observed regarding certain barn owl information.